Just Focus on the “Gospel.” Is It so Simple?

I remember one Wednesday sitting in my applied anthropology class as we discussed the gospel.  Our professor drew a diagram on the board with four quadrants to explain to us how each of our cultures compresses the fullness of the gospel to one of the quadrants.  The American compression was in the top left quadrant which focused on the individual spiritual realm.  As a contrast he showed how Islam, in the bottom right quadrant, focused on the communal in this worldly realm.  Another example was Eastern Orthodox theology, which was in the top right quadrant that focused on the communal spiritual realm.  This was fascinating to me as I did not think of how we limit the gospel to one of these realms.  The point our professor was making was that ALL cultures compartmentalize and compress the fullness of the gospel. 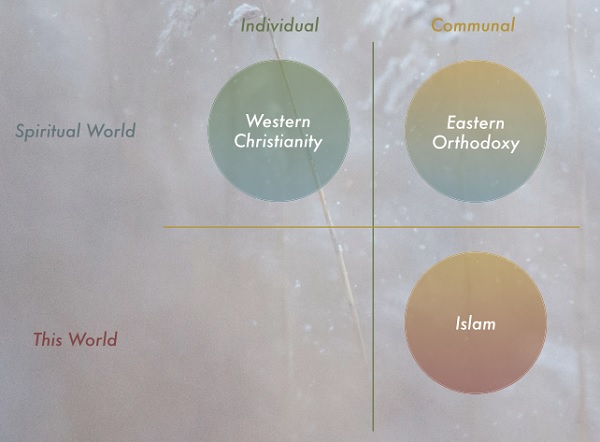 Jesus: Only a Ticket for Heaven?

He continued in the lecture to show the effects of this compartmentalization.  He said if a Western missionary tells an animistic 1 person that Jesus died for their sins and that if they want to go to heaven when they die they have to believe in him, they will think that we have to remember Jesus on our deathbeds but he has no effect on our lives now.  Is this the gospel?  How often do we only think of the gospel as Jesus dying for our sins and securing our place in heaven after we die?  When we communicate the gospel only as a ticket to heaven, it sends the message that Jesus and the gospel are only relevant to us after we die and not while we live now.  People deal with real life struggles and they seek hope in the midst of them.  The gospel should be able to speak into those struggles and trials if we preach the fullness of the gospel.  Now, I am not claiming to know the fullness of the gospel and all there is to know because as a human being, I am culturally conditioned and have blind spots as well.  My understanding is limited.  What I am saying is that we can learn from other brothers and sisters, who come from different backgrounds, to get a fuller picture of the gospel.  Any time we discuss things related to God, we must approach with humility.

As the Church, it is necessary for us to preach a full gospel; otherwise we risk being irrelevant in our evangelism and people will look to other sources for answers. One example from history is seen in the life of Malcolm X.  As a minister and recruiter for the Nation of Islam, Malcolm X did his recruiting outside churches.  He would stand outside and speak to Black people leaving church services and ask them what Jesus has done for them; what has Jesus done for Black people in the United States living under racism and discrimination?  The answer for Malcolm was clear: nothing.  He saw White churches and Black churches, and he saw the racism Black people were facing without a united response from the Church.  Malcolm felt that the Nation of Islam and the teachings of its leader, Elijah Muhammad, were relevant to the Black experience and helped elevate the dignity of Black people.  Malcolm saw Christianity as the White man’s religion and Islam as the solution for the plight of Black people in the United States.

Reaping the Seeds of an Incomplete Gospel

Today in New York City there is a religious group known as the Hebrew Israelites.  Their message is similar to that of the Nation of Islam.  For the Hebrew Israelites, White people are devils and only people of color can receive salvation.  For them, the Christianity others preach is the White man’s religion.  Part of this is a result of Christians not addressing the race issues that are happening.  As a Christian one does not have to go far to see the problems with the Hebrew Israelite view.  The real problem is when we don’t address these issues.  We stay silent on the social issues concerning people because we don’t want to get “political” and we only want to preach “the gospel.”  “The gospel” that is limiting it to Jesus dying for my sins so I can go to heaven when I die.

The Price of Silence

Our silence on these issues is dangerous.  Our silence leaves our people vulnerable.  They become vulnerable because when the Church doesn’t speak about an issue, they go to other places to find answers and those places don’t necessarily give godly answers.  To not think and reflect on social issues is foolish.  Our non-Christian friends and neighbors are thinking of the issues plaguing the world, and if we are to witness to them, we should have some thoughtful biblical and theological reflection on the issues at hand.  Otherwise they will think Christianity and its message are irrelevant to what is happening in the world.

One man who spoke on the societal issues plaguing his people was Oscar Romero.  He was a Roman Catholic bishop and the archbishop of San Salvador, El Salvador from 1977 until his assassination in 1980.  Romero preached numerous sermons as archbishop and in those sermons he sought to shed light on the violence and injustice his people were experiencing. He once preached: “To try to preach without referring to the history one preaches in is not to preach the Gospel.” 2  This was one of Romero’s core convictions.  If Romero had just preached about spiritual things with no relation to what was happening, more of his people would have sought answers from any of the extremist groups in El Salvador.  Instead, Romero connected the spiritual and the societal in his preaching and sought to give his people hope, and help them understand, from a biblical perspective, how God feels about the injustices and hardships they were facing.

Jesus Didn’t Ask, “Do You Want to Be Saved?”

Another professor I had in seminary once said:  “Jesus did not go around asking people, do you want to be saved? He asked; what do you want me to do for you?”  Looking at Jesus’s ministry we see that he healed blind people and lepers, people who were outcasts and looked down upon.  Jesus did not just come to earth and then die on the cross for our sins.  He did a lot in between with the people who were around him and addressed the societal troubles they faced while also taking care of their ultimate spiritual needs.  In Revelation 21 we see a beautiful picture of heaven and earth being united, because God’s kingdom includes heaven and this world with EVERYTHING (society, systems, culture, etc.) in it.  All of it must be redeemed and come under the authority of the true King.  The message we speak has to be a balance of the spiritual truth that speaks to the present reality.  Our gospel must include both.  If not, perhaps our church buildings are better suited as museums than places of worship.

My hope for the Church going forward is that we engage with the issues going on in our society and communities, that we can reflect and think about what God’s Word may have to say about an issue, and how Kingdom principles (that is God’s Kingdom) can be applied in a particular situation or to a particular issue.  This call is not simply for pastors and ministry leaders.  This call is also for lay people.  We can start by raising questions in our Bible studies and small groups.  We can ask our pastors and ministry leaders questions about social issues or bring their attention to them.  We must not accept the answer, “Let’s just focus on the gospel,” because all issues facing the world are gospel issues.  Our ministry must be done in love and humility with the guidance and help of the Holy Spirit.

1  Animism is a worldview where people view the supernatural or spiritual world influencing what happens in the physical world. An animistic person may go to a shaman or witch doctor (or some equivalent) to receive help and good fortune from the spirits for various reasons. Animism is not monolithic, there are many places in the world where this worldview is found.

2  This quote is an English translation from a sermon preached in Spanish by Oscar Romero on February 18, 1979. The English translation of the sermon title is: “Christ, an Always New Word for the Church.” It was found on the Romero trust website. More information about Romero and his sermons can be found by going online to: romerotrust.org.uk.

Larry Torres is studying at Edinburgh Theological Seminary in the UK.  He is in the Master of Theology program by research and is working on a thesis in the field of preaching.  He has a Master of Divinity degree from Gordon-Conwell Theological Seminary (South Hamilton, MA), and his interests include preaching, missions, theology and culture, baseball, and playing basketball in his free time.